Today we've seen the local papers hitting the streets! (You can pick up a copy for free at Mill Hill Library, why not have a coffee in the hub whilst you are there).

The local Conservatives have taken out a huge front page advert, no doubt at huge expense. The Mill Hill Lib Dems have a different way of doing things. We want to talk about issues. We want the council to fix things. What is interesting about the Tories wraparound is that they are having to play fast and loose with the facts. This is what they say 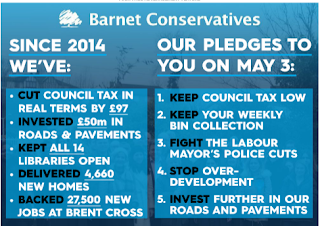 Lets have a look at the their record since 2014 - These are the things they have chosen as the five things they think are their greatest achivements.

1. Cut Council tax in "real terms" by £97 - They don't mention that their forthcoming budget plans for rises. They also don't say that this cost cutting has lead to reduced police numbers, a plague of potholes and OFSTED declaring that childrens services are failing. It is normal for councils to squeeze the budgets in the year before an election, so they can claim they are keeping taxes low. Only a fool would think that once they get back in, they will not have another look at this.

2. Invested £50m in roads and pavements. They say a fool and their money are soon parted. The Mill Hill Lib Dems believe that allowing contractors to certify their own work has lead to shoddy work. We will bring back proper inspection of pothole repairs and road renweals. We believe that this will mean that the investment will be spent properly and not just doled out to contractors who are skimping on repairs with no comeback for taxpayers.

3. Kept all 14 Libraries open. This is a real big whopper. Mill Hill Library is only open because local volunteers stepped in. It is now run by a newly founded charity. Mill Hill is lucky to have community minded people. For the Tories to claim credit for the generosity of local people is quite shocking. Mill Hill Lib Dem Candidate Richard Logue is one of the key figures in keeping the Library open. It is shocking that the Barnet Tories claim credit for Richards work.

4. Delivered 4,600 new homes. What this means is that they've passed planning permission allowing for 4,600 new homes to be built, by developers. What they don't say is that homelessness has risen. Mill Hill Lib Dem Roger Tichborne has been volunteering with the Mill Hill Churches Homeless Shelter, working overnight sessions for the last three and a half years. The shelter was set up in response to the homelessness crisis.

5. Backed 27,500 new jobs at Brent Cross. What they mean is that they've passed planning permission for the Brent Cross development. The Mill Hill Lib Dems note that whilst people in Hendon will benefit from a new rail line, backed by the Council to Brent Cross and Acton, they will not support an extension to Mill Hill, even though the railway could run on existing tracks.

So what have the Mill Hill Lib Dems been talking about? Well whilst the Tories have to pay for adverts, making dubious claims and nicking the credit for other peoples work, the Lib Dems had three stories in the local press. 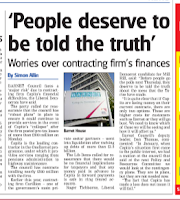 Whilst the Tories can afford to splash the cash on expensive front pages, The MilL Hill Lib Dems have been fighting to get a good deal from the contractors who work for the Council. The Barnet Tories have outsourced the running of much of the Council to Capita. Now Capita are having financial difficulties and had to raise £700 million to stay afloat. The Mill Hill Lib Dems have raised a number of questions as to whether Barnet residents are adequately protected. We even got Lib Dem Leader to raise a debate on the subject in the House of Commons. Sadly, the response of both our MP Matthew Offord and Dan Thomas, Deputy Leader of the council leaves a lot to be desired. A trip around Hendon Cemetery shows just how poor the work done by Capita for Barnet really is. Whilst the Tories get "reassurances", we get out and have a look at what is really happening.

The second story making the press was our campaign to get more GP places to ensure that the new developments do not leave people without access to GP surgeries. This is a massive issue for many, with it becoming impossible to register with Millway and Barbara Langstone Way Surgeries. 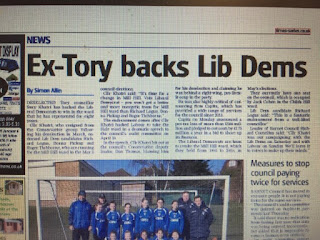 The Last Story we feature is that well respected local Conservative Councillor Sury Khatri has backed the Lib Dems in Mill. Sury Khatri is currently the Deputy Chair of the Barnet Council Audit Committee. Clashes with the Tory Deputy Leader Dan Thomas over the management of the Capita Contract lead to Thomas moving to get a more "amenable" member in Mill Hill. He described Sury as "bad tempered". Unsurprising really as Thomas clearly was pressuring him and being unreasonable.


There are two ways you can get coverage in the local press. The Barnet Tory way is to buy a large ad and write what you like. The Mill Hill Lib Dems prefer to raise real issues and put them on the agenda. It looks like it's 3-1 to us this week in the press coverage.
at April 26, 2018