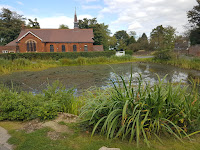 Welcome to the Fourth edition of our Mill Hill Focus. We've had a marvellous response to our weekly newsletter. We want to know what people in Mill Hill are talking about and what you want us to cover. Is there a picture or video you want us to include?
The hot topic  (excuse the pun!) for many people in Mill Hill is the temperature on Thameslink trains. We have an update below. We also have a response from Barnet Council and the Mill Hill Councillors on vandalism.

Today we learned of major resurfacing works in Mill Hill Broadway on Monday 23 October between 08:00 and 18:00. We have tweeted to alert residents to avoid the area. Parking has been suspended and there is likely to be significant congestion, especially in rush hour.

As you can see, the signage is woefully inadequate. A contact number for help has been obscured on the posters and a hand written sign stating that it will be a tow away zone. You may notice contradictory different times on different posters (some stating works finish at 18:00 PM (sic) and some 17:00). Surely such important information should be checked and correct.

We believe that when such major roadworks is being undertaken, the council should ensure that the contractors ensure proper signage (two sided so unmissable) is put up well in advance. We would also like to see signs advising motorists to avoid the area placed at all strategic junctions.
Of course roadworks have to be undertaken, but these should be planned and residents kept informed.  We believe that the council should use its Twitter feed and Roads website to keep residents properly informed of all roadworks, closures and maintenance that affects road users. Mill Hill Broadway is the Borough's busiest railway station, so a plan should have been put in place to minimise disruption. If passengers are being dropped off for trains connecting to inter city or air services, this could have disastrous implications.

We believe that websites and twitter feeds should be used to pass on useful information concerning our neighbourhood. All too often, they are simply used for PR purposes for Barnet Council.
Mill Hill Environment and Campaigns

As regular readers will know, we've been running a campaign to get better co-operation between the Police and the council to address issues of vandalism in and around Mill Hill Broadway.

There has been a spate of vandalism against shops on Mill Hill Broadway in recent months. In one case a particular shop has had its window smashed three times in the last few weeks. Shop owners are
reporting difficulties in getting the council to hand over CCTV footage to the police.

I want the council to readily share all CCTV footage with the Metropolitan Police. Traders are  reporting that the council are asking them to say in what 20 minute time window the vandalism occurred. This is not acceptable.

The safety of our residents and their property is of paramount importance to us. If a criminal offence has been committed we ask that residents report it to police who will then be able to request
any CCTV footage relating to it from the council. We will always assist the police in their investigations and do so on a regular basis by providing CCTV footage for evidential purposes.
We have a well-established process for sharing footage with police, this continues to work well, and we’re not aware of any issues such as those described as happening in Mill Hill.

Furthermore the council does not require the police to provide a 20min time window in order for us to provide the footage. While monitoring the borough’s network of CCTV cameras, operators also frequently alert the police to incidents as they unfold.

In the last 12 months we have provided 230 packages of footage to support investigations and contributed to the arrest of more than 370 suspects.

If police request footage for a lawful purpose (e.g. an investigation) and if the relevant footage exists then that footage will be provided to the police.

That process is working well: In the last 12 months Barnet CCTV has provided the police with 230 evidential packs to support police investigations.

Barnet Police have confirmed that are not having any difficulties in obtaining CCTV footage from LBB either in general or in particular in relation to Mill Hill Broadway – they have given reassurance that the process by which officers request and obtain our footage is working well.

We believe that this response from Barnet Council shows an alarming sense of complacency. To claim that everything is working well, when traders and residents are reporting a completely different story shows exactly why we need action. Following this update, we informed Dan Bleisch from the Mill Hill Music Festival of the council response. The festival had banners slashed with blades. Dan is still awaiting a sensible response, despite having made numerous requests. We couldn't possibly print Dan's response to the council in a family blog. We wonder why the Mill Hill ward councillors present at this meeting had not bothered to speak to the affected traders. It is all very well quoting Borough wide statistics in responses to Mill Hill issues (there are 21 different wards in the London Borough of Barnet and dozens of sites with CCTV footage), but these platitudes do not help. When we started this campaign, we assumed that the council would take a sensible and pragmatic approach. As Richard was away on a charity bike ride, we sent Marcus from our campaign along to ask a supplementary question. The councillor running the meeting told him quoting "hearsay" and saying that violent crime etc was a higher priority.  We find that response most unacceptable, especially as Councillor Joan Scannell is a member of the Mill Hill Music Festival committee and has emailed both the Police and Council on the issue. It is clear that we need the Council, the Police and the community to work together to address these issues. It is also clear that there is a very complacent attitude amongst Mill Hill Councillors, who are quite happy to regurgitate what council officials tell them, rather than actually chatting to residents and finding out their real world concerns. In short we want A BETTER MILL HILL.


We are also sorry to say that we are still seeing issues with traders leaving unsightly rubbish on the Broadway.

Do you use Thameslink? Many people who live in Mill Hill regularly use this railway. If you do, you may well be aware that the carriages, especially in rush hour, have been getting unbearably hot. As these are brand new, state of the art trains, we were most surprised to learn that the trains have been delivered with a design fault. The Manufacturers, Seimens have now acknowledged this and put the following tweet out following pressure from us and other users

And this is the problem!

We will keep you informed on the progress towards a fix


We love Mill Hill! So every week we bring you the best of the tweets, local events and great pictures from our community. Here is this weeks selection. If you are on Twitter, why not follow all of your local community groups and businesses.


There are some great autumnal colours in Mill Hill! (or there were before the storm)

Talking of music in Mill Hill, some great music is being made locally

Are you looking forward to the Mill Hill Christmas Markets? We are

We can't wait to celebrate the festive season again in #Millhill! Join us on 1-2 Dec for a fab #market #music and more! pic.twitter.com/MQYnNhDb2h
— Vibe Market (@VibeMarket) October 19, 2017

If you live in Mill Hill, did you know we have our own Facebook group. Why not join the Mill Hill Families https://www.facebook.com/groups/millhillfamilies/ page.


"This group is primarily for families and anyone living in Mill Hill NW7 to post anything of interest (info/tips/promotions etc) for people (ideally) living in Mill Hill who are looking to buy, sell, promote, recommend or for any queries for local tradesman etc (e.g. which tradesmen to use, which shops for home stuff) and of course just general local news/info."

Email ThisBlogThis!Share to TwitterShare to FacebookShare to Pinterest
Labels: Thameslink