Welcome to our third edition of our Mill Hill Focus. We've had a marvellous response to our weekly newsletter. We've only been going a month and we've already got thousands of views. We hope you like the style and content. Please keep an eye on our Twitter Account and send us a message of copy us into a Tweet if there is something you thing we should know.

Last week  we highlighted the launch of a campaign to improve communication between the Council and the Police to better use CCTV cameras in Mill Hill Broadway to combat vandalism. The local Times newspaper has picked up the story. We were a little bit disappointed that the councillor in charge told the Times "we’re not aware of any issues such as those described as happening in Mill Hill". Roger Tichborne, one of the campaigners told us "I was rather surprised at his comments, as his esteemed council colleague and Mill Hill resident Councillor Joan Scannell had actually emailed the police and the council on the matter, on behalf of Mill Hill Music Festival, when vandals used blades to slash banners. I hope Councillor Longstaff has now spoken to his colleague and is fully briefed. I would recommend that he also speaks to the staff at The Creamery if he wants the full picture". Roger added "I had rather hoped that the council would recognise that this was simply a rather sensible idea and get on with it, rather than pretending there is no issue". Please support the petition. 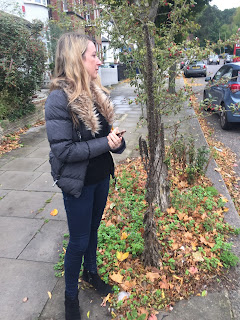 There is a growing issue in Mill Hill with maintenance of roads and pavements. You’d be forgiven for thinking that some of Mill Hill’s pavements are turning into a wildlife park. The condition of our roads and pavements continues to be deteriorate. Donna Pickup is pictured with a massive weed on Daws Lane that is taller than her.

Many pavements in Mill Hill have been resurfaced in the last few years. Perfectly good granite paving stones were ripped out and replaced, some with a far lower quality asphalt surface. Others were replaced with concrete slabs, which don't seem to be able to take the wear and tear of a busy suburb.

Another issue that has recently reared its ugly head is the poor quality of road repairs in Mill Hill. A recent resurfacing of Flower Lane resulted in man hole covers being recessed from the road, causing damage to cars and motorbikes. The local alloy wheel repair shop at Bunns Lane Welding has reported a whole spate of emergency repairs to wheels damaged by these unmarked hazards. We have also heard of a motorcyclist coming off their bike as a result. Fortunately, apart from a buckled wheel, no permanent damage was done. Road surfaces are also deteriorating, which is likely to see a rise in dangerous potholes as the winter ice attacks the road surface.


Many recently surfaced roads in Mill Hill are already starting to wear out. Do you have a favourite pothole? Send us your pictures pic.twitter.com/blgw7oCjQG
— A Better Mill Hill (@ABetterMillHill) October 6, 2017


It is clear that when local roads were done, the work was not up to the correct standard.

There is an ongoing issue with bins in parks. Sadly this is getting worse.


Arrendene - please put your rubbish in the bin, not next to it pic.twitter.com/3huhZDEW63
— A Better Mill Hill (@ABetterMillHill) October 8, 2017


Finally on the subject of the environment, there is the perennial issue of fly tipping. We saw this on our rounds


We urge Barnet council to sort these issues out.
.

Our local divers at Barnet Copthall diving club have been excelling of late!

Bowled over by @CopthallSchool1 @FrithManor on Thursday! Their national #Progress8 results are in the TOP 3.2% of state schools in the UK! pic.twitter.com/cqs2edNjPl
— NorthLondonHour (@NorthLondonHour) October 14, 2017


On the political front, a respected polling organisation is predicting that we'd have a new MP in Mill Hill if a general election was held tomorrow. Of course we all know opinion polls and elections are completely different things!

There are also some tickets left for the amazing new production by the Mill Hill Music Theatre Company - but they are selling fast! .

The new Thameslink trains are now in service, but we won’t be getting the new, improved timetables for at least a year. Until then Mill Hill commuters (and we are commuters too!) have to put up with cancellations and a service that could be more frequent. We will be watching Thameslink closely and will be pushing for Thameslink to hold a “Meet the Manager” session in Mill Hill Broadway
Readers will be interested to see the new rush hour service pattern for the Thameslink service from Mill Hill. The good news is that when it eventually arrives, it looks like we'll be seeing more regular rush hour services.

Finally, we've had good feedback about our local pictures. Here are a few more.


Have you got a favourite Mill Hill picture? One of mine, a Rainbow over the house used in the John Cleese specsavers advert! pic.twitter.com/f5ELTTgvs2
— A Better Mill Hill (@ABetterMillHill) October 12, 2017