Welcome to the 23rd edition of our weekly newsletter for the Mill Hill Community.  Published every Sunday, we bring all the latest news stories, events and other information for people living in and around Mill Hill.

Do you want to see A Better Mill Hill? Do you want to contribute to making our area nicer, cleaner, greener, more friendly, with a better sense of local community? The Focus team of Donna Pickup, Richard Logue and Roger Tichborne are all local residents, involved with the community and local schools. If you want to stay in touch with us and know what we are doing
CLICK HERE TO FOLLOW US ON TWITTER 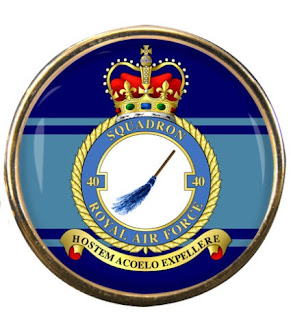 This coming Easter Sunday is the 100th Anniversary of the founding of the RAF. St Michael's Church on Flower Lane, will be having special prayers of thanksgiving for all who served in the RAF at their Easter Sunday Service on April 1st at 10am.

Focus team member Roger Tichborne, has been invited by Fr Steven to lead the prayers. Roger said "My father was a bomber pilot, serving with No. 40 Squadron during World War II. He was shot down over Bucharest on his 40th mission. Sadly his rear gunner F/O Murphy was killed, but the rest of the crew survived, were captured, held as POW's eventually escaping and being repatriated by the USAF via Italy. It is a great honour to be asked to lead the prayers and to commemorate the efforts of all who served and the sacrifice of those who did not come back".

The Borough of Barnet has long a long shared history with the RAF, through the Hendon Aerodrome and the RAF museum. We hope that all who have an association with the RAF can come along to participate.

POT HOLES
This week we take a look at the hottest topic in Town. We are of course talking about Potholes. Focus Team member Roger Tichborne was interviewed by Beril from the One Show team for City News. Roger gave Beril a tour of Mill Hill's finest pothole, with some lovely shots of potholes on Bunns Lane, Wise Lane and Hale Lane. One main reason is that Barnet Council have spent 7% less on repairs.


Ever wondered how many potholes there are in Mill Hill. Here's the https://t.co/vFetGRqKgI Map as of today - full details on todays blog for #PotHoleDay - https://t.co/7zzbPdSJLy pic.twitter.com/hZYpJ8fpxp
— Roger Tichborne/RogT #CTID (@Barneteye) March 22, 2018

Here are a few choice potholes from our locality

Today is #pothole day in Mill Hill! Here are some of our favourites
#4 - This will soon be the mother of all potholes, marked by lovely sign pic.twitter.com/5Vgx9k7UcY
— Roger Tichborne/RogT #CTID (@Barneteye) March 22, 2018

Dan Friday, a Mill Hill Resident has also been on the case

The Barnet Times picked up on the story and spoke to Councillor Dean Cohen about the issue. When asked what could be done to stop the plague of potholes, Cllr Cohen stated:


“As ever, this is all talk from opposition councillors. Neither Labour nor the Lib Dems made any mention of roads and footways in their alternative budgets. This is unsurprising given the unprecedented amount this administration is spending on our roads and footways.”

We think Councillor Cohen is missing the point. It is not opposition councillors talking about Potholes, it is everyone who owns a car, motorcycle or pushbike. It is not only car drivers, for cyclists, potholes can be a serious danger. Another issue that isn't mentioned by Councillor Cohen is the damage and danger of loose stones on the carriageway, that can be shot out like bullets by passing cars.

The focus team spoke to an expert in road maintenance who told us off the record that the issue in Barnet is that contractors work is not inspected, therefore there is no incentive to do it properly. This is why we see bodged repairs that last a matter of days. We believe that the council should inspect work before contractors are paid. This would ensure that they actually fix the potholes. We also would like to see refuse collection crews reporting in all potholes and damaged road surfaces as they do their weekly rounds.

It is there in black and white. This has been approved and adopted as policy by Barnet Council. We are calling on them to come clean and tell us exactly what the real plans are for bin collections. We have already seen cuts, with Xmas trees being left for weeks after Christmas, as green bin collections were suspended.

Mill Hill Rugby Club are looking for players for a new Ladies team. You should have had a leaflet through your front door over the weekend. They are also hosting a family fun day for Mencap

Val's Jam Night - March 28th - The last Wednesday of every month sees MHJC filled to the brim with Jazz singers, players and listening aficionados who flock to the club to give of their best for the sheer joy of all. - Please RT.
— Mill Hill Jazz Club (@millhilljazz) March 23, 2018

Come and take part in our quiz night at 7.45pm on Friday 13th April, with all proceeds going towards our #charity partner @NoahsArkHospice. pic.twitter.com/B8aJOIZANg
— Mill Hill Village CC (@MHVCricketClub) March 25, 2018