By Member of the team, Roger Tichborne

This blog has been posted in response to the actions of Twitter, who are now displaying warning messages on all UK Blogspot blogs. This affects our blog as well as other blogs Roger contributes to.


I am livid. I have been a Twitter user for the best part of a decade. I have over 2,000 followers and have posted over 20,000 tweets in that time. I write a blog (this blog) on the UK Blogspot platform and use twitter as a vital part of my interaction with people who are interested in what I have to say.

Yesterday, I tried to post a link to a write up of a shopkeeper killed in Mill Hill. I was shocked to be informed that Twitter would not let me, on the grounds that I may be a Robot! This is the message that was displayed.

I assumed that someone had reported me to Twitter in an act of malicious spite. I Tweeted at the Twitter support. I also cc'd my fellow bloggers. I found I could post links to other sites, just not my blog.

To their credit, we received support from a most unexpected quarter when the picture started to emerge that the other Barnet Bloggers also appear to have been blocked from posting to their website.


We want to make it clear that whoever or whatever was behind this, it wasn't our team. We dont often agree but we do believe in the fourth estate. We hope @TwitterSupport resolve this as soon as possible and will vouch for all four bloggers if necessary.
— Barnet Conservatives (@BarnetTories) February 12, 2018


I must say I am highly appreciative of the action of the Barnet Conservatives. It is entirely appropriate that all parties support free speech and genuine comment.

I then discovered that all historical tweets linking to my site also have a health warning. I was shocked to see this message. 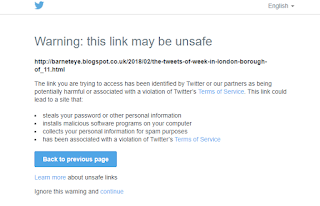 In my book this is slanderous. Twitter have absolutely no grounds to state that my blog may be unsafe. Blogspot is a platform owned by Google and as this affects all UK Blogs (for some strange reason US blogs are not affected) it is clear that something has gone very wrong in Twitter.

I decided to try and contact Twitter support. Rather ironically, having been accused of being an automated Tweeter earlier, I clearly got a response from  a Twitter Robot when I attempted this. 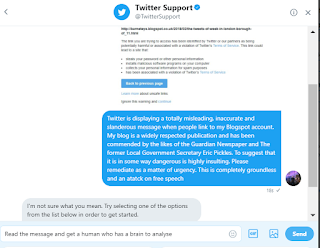 Quite frankly, I am completely disgusted with Twitter. I am really not sure where to go with this. I suppose that the National Press is the next step. It seems to me that it ridiculous for Twitter to claim the UK Blogspot URL behaves different to the US version

Quite why Twitter has chosen to declare war on UK Bloggers is something one can only ponder. Is it malicious or simply incompetent. It won't change anything. We won't go away.