Welcome to the 17th edition of our weekly newsletter for the Mill Hill Community.  Published every Sunday, we bring all the latest news stories, events and other information for people living in and around Mill Hill.  If you like what you see 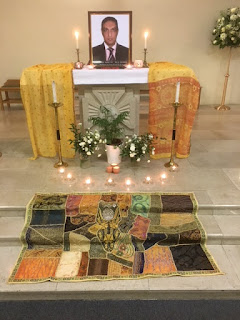 We start our coverage of this weeks events with an absolutely beautiful tribute last night to Vijay Patel, the shopworker tragically killed in Mill Hill Broadway in January. The service was held at The Sacred Heart Church in Mill Hill. This was a cross community event with music, scripture readings from many of the faith traditions in our community and poetry. It was followed by a gathering in the church hall, where members from across our community mixed and mingled and enjoyed a snacks provided by local people.

The Mayor of Barnet attended in his role as first citizen of the Borough and spoke some words about our community. Also in attendence was Martin HC Russell, Her Majesty’s Deputy Lieutenant of Greater London, representing Her Majesty, Queen Elizabeth II.

It was great to see the various faith leaders from across our community getting together. The readings emphasised that across our communities, there is far more that unites us than divides us. The event was a poignant reminder that we are lucky to live in a community that cares. The reason that the death of Mr Patel was such a shock is because such events are so rare in our neighbourhood of London.

Fr Michael McCullagh of the Sacred Heart Church acted as MC for the evening and welcomed members from the Jewish, Islamic, Christian and Hindu communities. Perhaps the most moving tribute was from Mr Patels co-worker, who is a Muslim and read a passage from the Koran (Mr Patel was a Hindu). When he finished, he made a moving personal tribute to Mr Patel and to the response of the community. I don't think there was a dry eye in the house and there was a warm, spontaneous round of applause as he finished. This is the real face of our community, a Muslim making a tribute to a Hindu co-worker, in a Roman Catholic Church, applauded by people of all faiths and none. A very emotional night. Many thanks to everyone who helped put it together.

Other news
We will be brief today.
Our local MP Mr Matthew Offord and the Metropolitan Police held a meeting about the recent events in Mill Hill this week. There is a full report on the meeting on the Barnet Eye website (Click for link)

We found some great pictures of Mill Hill from 1994 this week. Many people have enjoyed them.