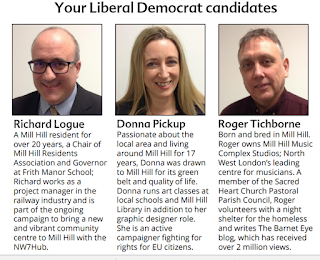 Barnet Council has confounded the bookies and the punduts (although not the Barnet Eye as we predicted this on the 30th January) and elected a Conservative Council with a massively increased majority. Today we start a three part series, analysing the way forward for the main parties. We start with the Lib Dems and the Green party.

The two parties have been in a struggle to the death to be third in Barnet for a decade or so. At the 2014 elections, the Greens managed to beat the Lib Dems into fourth in many seats, where they stood. In 2018, the positions have been reversed, with the Lib Dems consolidating the third spot.

The truth is that any party which only has the ambition of finishing third is not really a party at all but a hobby. For the first time in a generation (or two), there are no Lib Dem councillors in the London Borough of Barnet. This has raised much cheer in Tory circles, with disgraced ex councillor Brian Coleman issuing a gloating tweet.


The question that all Lib Dems in the Borough need to consider is whether Coleman is right. If he is, then we should simply form a debating club for disaffected members of the other parties. As Labour is further to the left than ever and has shown that it is incapable of winning in the Borough of Barnet. As to the Conservatives, they are further to the right than ever. The council is stacked with hard line Brexiteers, in Mill Hill our local MP is so far to the right of the party, that he's almost falling off the cliff. He's as hard Brexit as they come, anti equal marriage and ready to act as a rent a quote for just about every policy in the loony right policy book and backing Foxhunting.

On the subject of climate change, Offord has consistently voted against measures to reduce CO2 emmissions (from They Work for You)

For me, voting against measures to reduce the CO2 emissions level of new homes is tantamount to a criminal act. Ensuring homes are as energy efficient as possible is clearly the most sensible policy possible. Not only is this good for the environment, it means homes are cheaper to heat etc for owners and it reduces our reliance on foreign electricity, gas and oil supplies.

In the face of such a polarised choice, it is clear that the Lib Dems should be able to make a strong case and in my opinion should be looking to be the top of the poll or a close second. We believe that the people of Barnet do not want extremists in power. In the local election, the Tories laid out no positive policies, laid out no plans to improve the Borough, made no commitment to bring in planning rules to protect the environment or green belt. They made no mention that the local Tory MP was backing schemes that threaten the green belt.


Really can’t believe that the people of Barnet fell for this. It is complete BS, but there you go pic.twitter.com/lmv6eAgdWR
— Roger Tichborne/RogT #CTID (@Barneteye) May 5, 2018


As the votes were being counted, I was given time to reflect. The Mill Hill Lib Dems put in the one of the best performances of any party anywhere in the country. The Mill Hill Lib Dem vote went up from 1,703 in the 2014 council elections to 3,481. This was a 104% increase. Given that we ran well known and hard working candidates such as Jeremy Davies (councillor between 1994 and 2010) and Alasdair Hill (local PPC) in 2014, it was not simply a case of working a ward we'd ignored previously.  We began campaigning in October in Mill Hill. In short a six month campaign doubled our vote. Given that the bad weather in March disrupted our campaigning, and our campaign was built on hard work, I believe that we could have done even better. The truth is that even better is not good enough. For me, it is about winning.  Is Brian Coleman right and have we seen the end of the Lib Dems as presence in the Town Hall?

If the Lib Dems are to return to the council chamber, then we need a step change. This will not be easy. We would have to double our vote again to get to the numbers we polled in 2010 in Mill Hill. But as we polled those numbers in 2010, we know that the potential is there. If we can double our vote in six months, what can we do with a campaign that starts today and embeds itself in our community? That doesn't mean four years of constant door knocking and delivering leaflets every week, but it does mean holding our current councillors to account and making sure that local people are made aware of every single bad decision they make. It means making sure that every single one of the 8,853 people in Mill Hill who voted Conservative are made to realise that they have elected people who are not taking decision which will improve their quality of life. It means getting the message across that if they had voted Lib Dem on Thursday, they would have got hard working local people who would have made a difference.

There is one other thing which the Lib Dems seriously need to consider in the Borough of Barnet. I was alerted to this by what has happened in Richmond where the Lib Dems won a stunning victory. My attention was drawn to this tweet.

Lib Dems GAIN #Richmond from Con in what I think is fair to term a landslide victory.

Greens also gain 4 seats in a local Green-Lib Dem pact that together reduced the Tories from 39 cllrs to 11. pic.twitter.com/ib8zsarsNG
— Election Maps UK (@ElectionMapsUK) May 4, 2018


The Lib Dems and the Greens in Richmond made a non aggression agreement. Although the parties are very different, they have many shared and common policies. We are both pro European and we are both committed to the environment. Both of us are disgusted by Matthew Offords support for foxhunting. I believe that a green presence in the Town Hall would be a very positive thing for Barnet. I don't agree with all of their policies, but to have someone making the case for sustainability can only be good.  I would suggest that the way such a pact would work would be for the Greens to stand aside in Childs Hill, Mill Hill and High Barnet, which are the Lib Dems three target wards. In return the Greens could pick three wards they wish to target. Lib Dems would stand aside as many candidates as the Greens wish to stand in these wards. I would suggest that it would be good for the Greens to stand 2 in such wards and the LD's 1. That would give the Greens and the LD's an opportunity to maximise their vote, especially if there is an unpopular candidate from another party.

This is far from perfect, but it will give progressive centre aligned parties, which support Remain a chance. Whether this chance is taken will depend on whether the individual activists are prepared to work. I believe that giving ourselves a better chance will mean that activists are prepared to work harder. If we all work harder and start today, then we have a chance.